Political changes at the beginning of 1990’s stimulated the need for long term vision and transnational spatial planning of the Baltic Sea Region. VASAB was founded in August 1992 at the Conference at Ministerial level in Karlskrona, which decided to work out a document “Vision and Strategies for the Baltic Sea Region 2010” and set up a Group of Focal Points from all interested countries and regions to monitor the work on the Final Report. The work started in December 1992 and was successfully completed two years later, when the third Ministerial Conference in Tallinn adopted the Final Report under the title “VASAB 2010. Towards a Framework for Spatial Development in the BSR” (so called “Tallinn Report”).

It has become not only an outline of spatial development perspective for the Baltic Sea Region and a useful basis for further strengthening and harmonisation of national and regional spatial planning policies, as Ministers wished in their Resolution, but also a handy compendium of very practical guidelines for further common works on projects development.

In it’s resolution the Tallinn Conference also outlined an implementation programme, stressing the role of co-ordination between national and cross-baltic spatial planning, bilateral and multilateral partnerships in projects promotion, intensified exchange of experience, and transfer of know how and spatial research in areas of common interest promotion.

The Conference appointed a Committee on Spatial Development in the BSR (CSD/BSR) with a common interim Secretariat in Sweden to support the CSD in 1995 (the intention of the Conference was that Ministers monitor the ongoing work on annual meetings and next was scheduled for December 1995 in Germany). The CSD was given mandate to co-ordinate the common actions. The Ministers welcomed the intention of the EU Commission to support the implementation of the VASAB action programme, while improving the co-ordination among existing EU Funds and programmes. The CSD was asked to prepare proposals for the continuation of the VASAB 2010 beyond 1996 with special emphasis on future institutional arrangements and co-operation with other regional organisation.

Such a document was prepared and presented to the next, fourth Ministerial Conference convened in Stockholm – Saltsjobadan in October 1996 under German chairmanship, back to back with Environmental Ministers Conference. The Conference gave a very practical framework for all the Vision and Strategies implementation process in the document “From Vision to Action” and it”s “Stockholm Declaration on Sustainable Spatial Development Policy in the BSR”. It also adopted “Common Recommendations for Spatial Planning of the Coastal Zone in the BSR”

The Conference focused on three dimensions of the future functioning of the Programme: 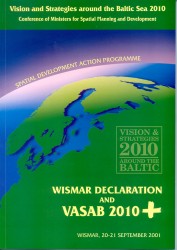 The fifth Ministerial Conference in Wismar (Germany) in September 2001 summed up implementation and set up new goals in VASAB 2010 PLUS Spatial Development Action Programme, calling the CSD/BSR to give more attention to co-operation in the field of spatial development policy at national level.

VASAB contributed substantially to the process of preparing content side of operational programmes of Baltic INTERREG II C, III B and a concept of INTERREG IV Initiative.

Recognizing new challenges of the Region led by the EU enlargement, the sixth Ministerial Conference in Gdansk in September 2005 instructed VASAB CSD:

The Long Term Perspective for the territorial development of the Baltic Sea Region, prepared for the period till 2030 was presented at the seventh Ministerial Conference in Vilnius in October 2009.

The eight Ministerial Conference in Tallinn on 26 September 2014 discussed the progress on implementing the VASAB Long-Term Perspective for the Territorial Development of the Baltic Sea Region.

VASAB 2010. Towards a Framework for Spatial Development in the BSR